THE RETURN OF INFLATION?

During an October 6, 1982 meeting with Republican Congressional candidates, President Ronald Reagan said, “Inflation is the greatest enemy of all the people and of our hopes for economic growth. It is at the bottom of the problems that we’re trying to solve[1].” At the time of Reagan’s remarks, core inflation (CPI) had dropped to 5.5% after peaking at nearly 15% in 1980, thanks to then Federal Reserve Chair Paul Volcker.[2] Today, in 2021, we are living in a period quite different from that which confronted President Reagan. For the past twelve years – since the Financial Crisis of 2008 – U.S. inflation has remained persistently low: while inflation remains a central concern, instead of seeking to solve for high inflation, the Federal Reserve is doing all it can to make it go higher.

The Federal Reserve (along with other central banks) has been doing everything in its power to stave off broad disinflationary forces in the U.S. economy and those caused by the pandemic. Conventional thinking holds that some inflation is good as it encourages spending – the most significant driver of the U.S. economy – unlike declining prices, which may lead to too much savings, constraining economic growth.

Economist Milton Friedman noted in 1963 that “inflation is always and everywhere a monetary phenomenon[3].” But how does that reconcile with today’s economy, where despite multiple rounds of quantitative easing and accommodative monetary policies, U.S. inflation has averaged just 1.5% per year since 2009[2]? The Federal Reserve has done everything, and then some, to lift U.S. inflation – yet core inflation has remained persistently low (though we argue that the Fed’s activities have led to inflation in financial assets). Further, politicians have been passing spending programs to support and stimulate the U.S. economy.

As indicated in Figure 1, U.S. short-term inflation expectations have increased somewhat, though longer-term inflation expectations have remained low and relatively unchanged.  The pandemic created significant supply disruptions – causing disequilibrium across several industries – which resulted in transitory price increases in many goods as demand remained strong. More dollars, buoyed by fiscal stimulus and the Fed’s cheap financing, were chasing fewer goods. Certain goods, particularly those related to the housing market (like lumber), have increased, but core U.S. inflation remains muted: the CPI increased just +1.4%[2] in 2020. Moreover, measures of inflation, such as the Cleveland Fed’s Inflation Model (Fig. 2) that incorporate more than just market-based data and that are significantly correlated with realized inflation, also remain relatively low. 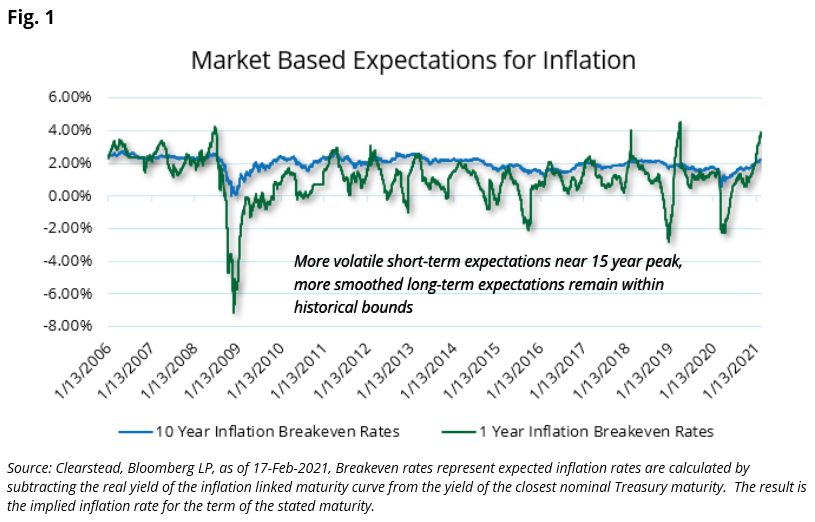 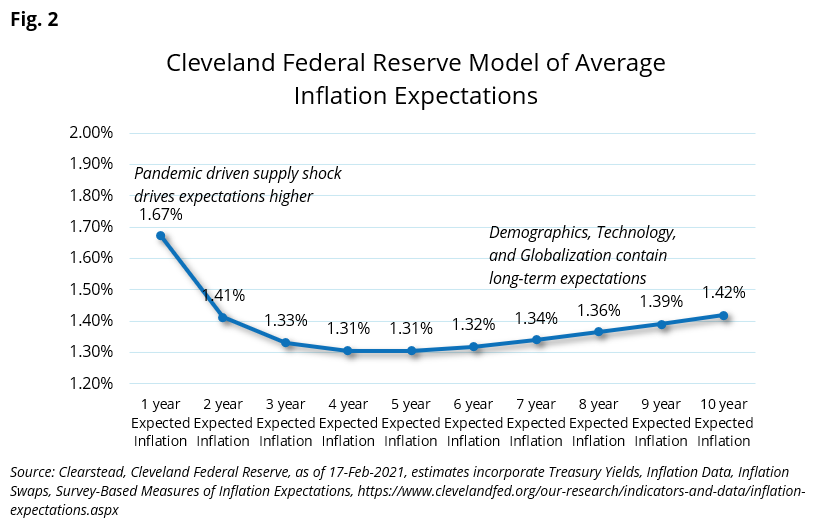 The low inflation phenomenon can be observed in the decline in the velocity of money (the frequency at which a unit of currency is used to purchase goods or services) and the increase in the money supply (Fig. 3), the net effect of which when combined with low GDP growth has kept inflation in check. Reasons for the declines in money velocity, particularly following the 2008-2009 financial crisis, are wide ranging but include a gloomy U.S. economy following the financial crisis and an increase in savings. 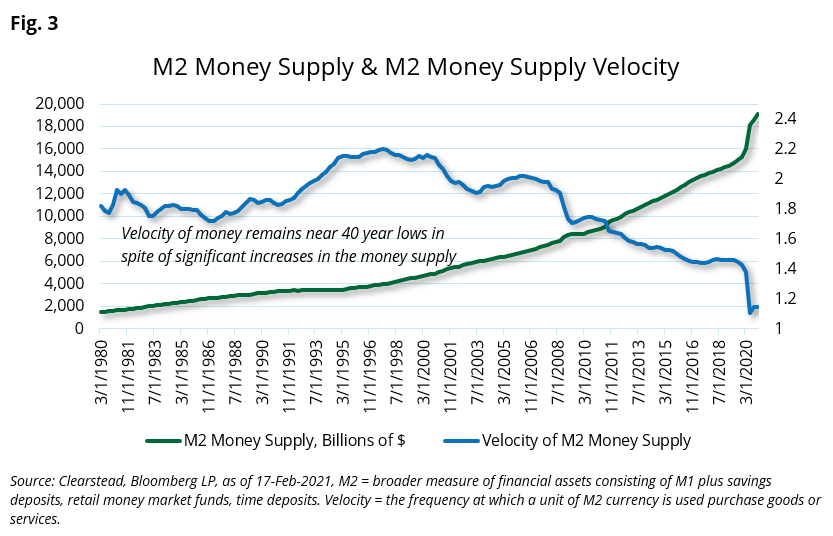 Another factor is the Federal Reserve’s new “average inflation targeting” framework which allows the possibility for U.S. inflation to run higher than the Fed’s targeted 2% inflation bogey (note: the Fed’s preferred measure of inflation is PCE, Personal Consumption Expenditures) to ensure the Fed does not tighten monetary policy prematurely and constrain the U.S. economy at a time when it is still in recovery. This factor is affecting U.S. short-term inflation expectations and driving them higher.

For reference, The Bureau of Labor Statistics produces the Consumer Price Index (CPI) which is meant to represent the aggregate of goods and services consumed. The CPI is an aggregation of 200 categories into 8 major groups – approximate weight of the category in the CPI index is in parentheses: food and beverage (14%), housing (42%), apparel (3%), transportation (16%), medical care (9%), recreation (6%), education and communication (7%), and other goods and services (3%). It is important to recognize that one’s interaction with inflation is largely dependent on the extent to which they are exposed to the various categories within the CPI. In the same way that observing the S&P 500 may not accurately portray your investments if you were a growth or value investor, the CPI headline number may not accurately convey your own inflation perspectives. A good example comes from a 2003 paper[4], in which the Federal Reserve Bank of New York noted that inflation disparities at the household level were generally due to three categories: education, healthcare, and gasoline.

From an investment perspective, portfolio construction should incorporate a variety of potential outcomes. As we noted before, some inflation is good and growth asset classes, such as public and private equity, can benefit from the inflation dynamics we assume to be in place for the long-term. Additionally, certain diversifying assets, such as private real estate and infrastructure, may provide a natural hedge to inflation. In all cases, any portfolio positioning should be related to long-term expectations rather than more volatile short-term ones.

Most importantly, we continue to test our views as new information becomes available. Given the significant scale of fiscal stimulus and uncertain path of the pandemic (though less so now), it is prudent to revisit these expectations frequently. As always, we thank you for you trust in Clearstead and please contact us with any questions.

For additional market observations and expectations, read our weekly Research Corner, which is published every Monday morning.